I was lucky enough to attend three St. George’s Day activities this year.

Firstly Cromer and North East Norfolk’s parade hosted by Roughton Mill Scout Group. I biked and was a bit late but made it to the church on time!

It was a great service with a rock band and lots of sheep! Thanks Rena and Co!

There was a nice bit in the EDP about the parade.

Eastern Norwich held an activity day on the Norwich School playing field, there was 20 activities for the groups of young people to take part in, including archery, cycle races and water activities.

Bajestic the dragon was also in attendance.

Everyone was having a great time, it was lovely to see the groups working together.  Well done everyone!

Here are some photos…

Last but not least I visited Southern Norfolk to see their parade and take part in the service at St Mary’s in Attleborough.

There were lots of onlookers for the parade and the rain held off!

The church was bursting at the seams because so many people had turned out – it was very warm inside! but a great atmosphere.

They had a Dragon too, who luckily George saw pity on and chased away instead of the traditional ending….

Thank you Steve and Team!

Here are a few photos… 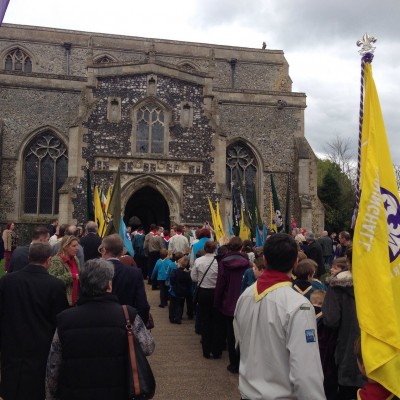