Cubs all across Norfolk celebrated the 100th Birthday of Cub Scouting last night and renewed their Cub Scout promise at 19:16hrs.

In January 1914 a pilot programme for younger boys named ‘Wolf Cubs or Junior Scouts’ was launched and 12 months later the section was 10,000 strong.

After a two-year trial it was time to decide what to do with the Wolf Cubs. In June 1916 the first Cubmasters Conference was held and the following month Lady Scoutmaster Vera Barclay, who established one of the first Cub packs in 1914 was appointed as Assistant Secretary – Cubs.

Momentum gathered; in October it was announced that the Wolf Cubs ‘…has been put on to an official standing in the Boy Scout Association’. At the end of November the Wolf Cub Handbook and Magazine were published and on 16 December a launch was held with a Wolf Cubs display at Caxton Hall, London.

Influential guests were invited to the Wolf Cubs’ display. Following a speech from Baden-Powell, guests were presented with displays of Cub activities including gymnastics and ‘good turns’, a Grand Howl and the investiture of a new Cub.

We believe that the first Cub Pack in Norfolk was 1st Thorpe which was opened in 1915 by Hazel Addiss with 32 Cubs. She was only 16yrs old then, but subsequently went on to write 15 books for Cub Leaders and Gang Shows.

In 1996 HRH Prince of Wales was an unexpected guest at the Kings Lynn Cub Cooking Competition, staying to present the awards. In 2016 his daughter in law HRH Duchess of Cambridge has followed in his footsteps by visiting 14th Kings Lynn

This article will now continue with reports from around the County.

Cubs from East Norfolk celebrated the Cub Scout Centenary by coming together at the Hippodrome Circus in Great Yarmouth. All of the Cubs enjoyed a special performance of the Christmas Spectacular .
At 19:16hrs, all of the Cubs and Leaders renewed their promise surrounding the Grand Ring which was lined with flags from each Cub Pack in the District.

The promise was lead by the ADC Cubs, Linda Hansby-Patterson and the District commissioner, Jennifer Chetwynd.

Linda told me that “It had been a wonderful evening for everyone and all of the Cubs had really enjoyed themselves. The Hippodrome put on a fantastic show and were really accommodating towards all of the Cubs” 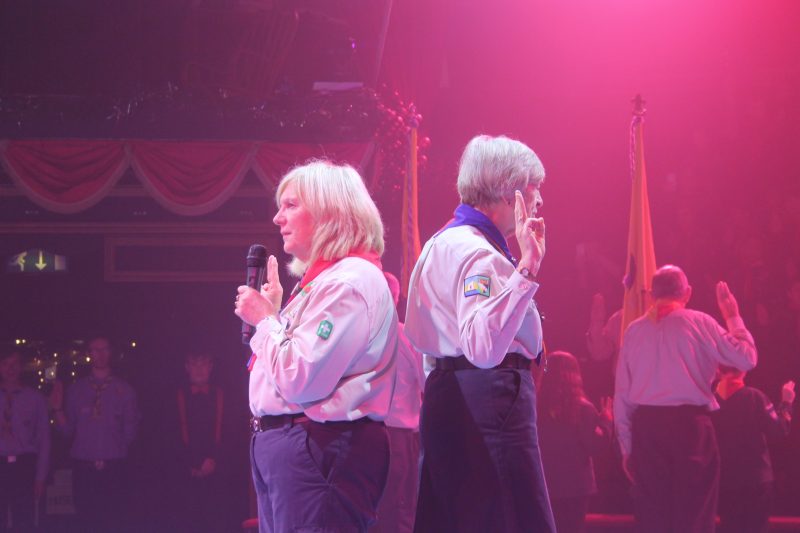 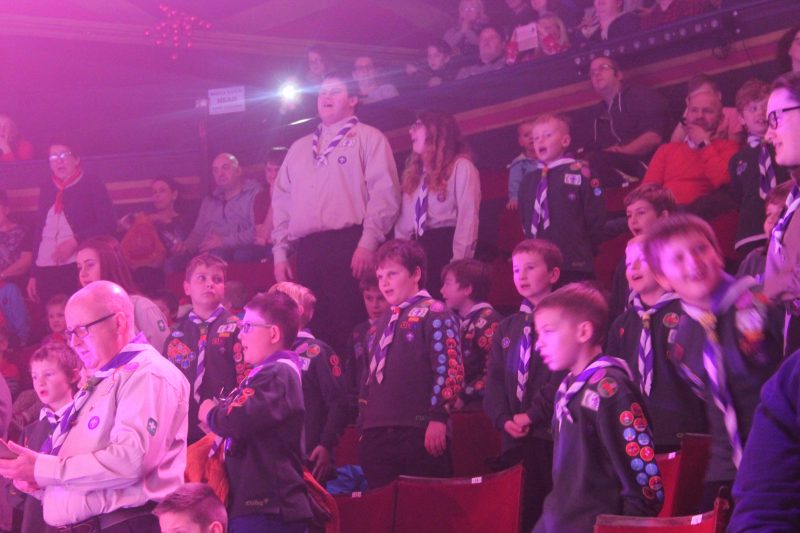 Cubs from six  Groups in Northern Norwich came together at St Catherine’s Church, Aylsham Road, Norwich to celebrate the official birthday of the Cub section.  They heard about events which had taken place in the world in each of the 10 decades since the Section was started 100 years ago.    Afterwards they played some games before two Cubs from the 1st Spixworth and 16th Norwich Scout Groups were invested.  The promise was also performed using sign language and semaphore and we heard it transmitted by Morse code.  As with any party everyone enjoyed birthday cake before finishing with a Grand Howl.  Thanks to the Group leaders for their support and help. 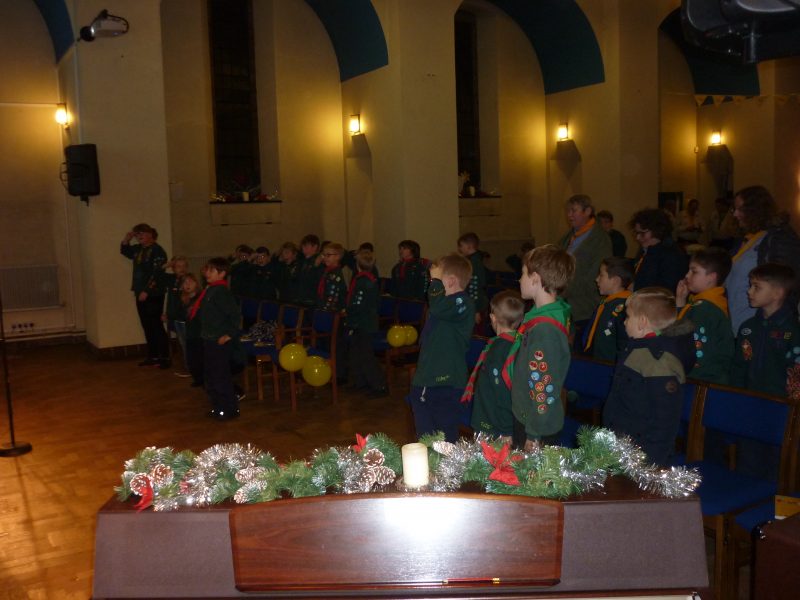 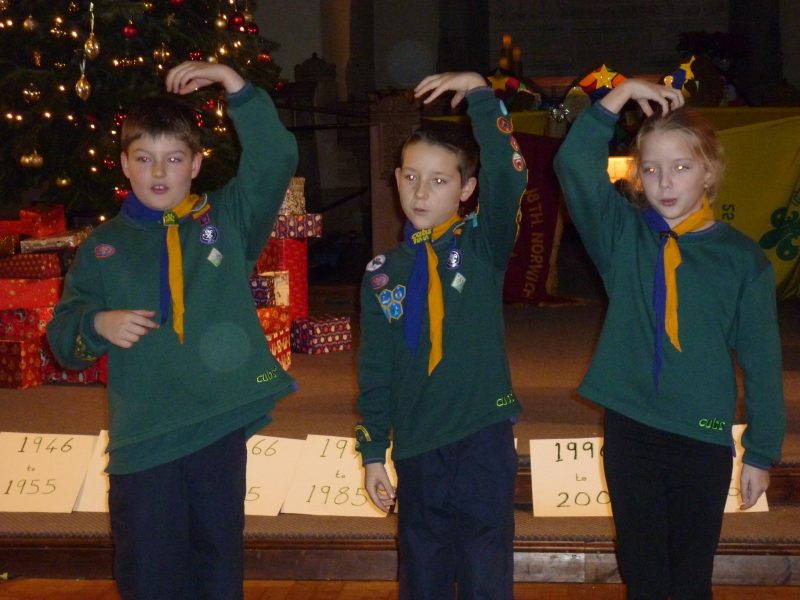 Southern Norwich enjoyed a fantastic Promise Party, the culmination of the years celebrations of the 100th Birthday of Cubs, at Bowthorpe Community Centre.

77 Cubs and around 20 leaders played some games and ate party food. Then, after a letter from Her Majesty Queen Elizabeth to Bear Grylls Chief scout was read out and four Cubs were presented with awards by the District Commissioner Andy Keats. The Cubs and Leaders renewed their Promise at 16 minutes past 7pm, the time the first Cub meeting made the first promise back in 1918.

Then they were entertained by Magical Edd and his friend Quackers the Duck!

The magic touched on Scouting with a magic knot rope trick, and then Cub volunteers assisted Edd in helping find Santa’s red suit!  and finished with a race of the snowmen! Quackers had the last word every time even when he was put in his box! 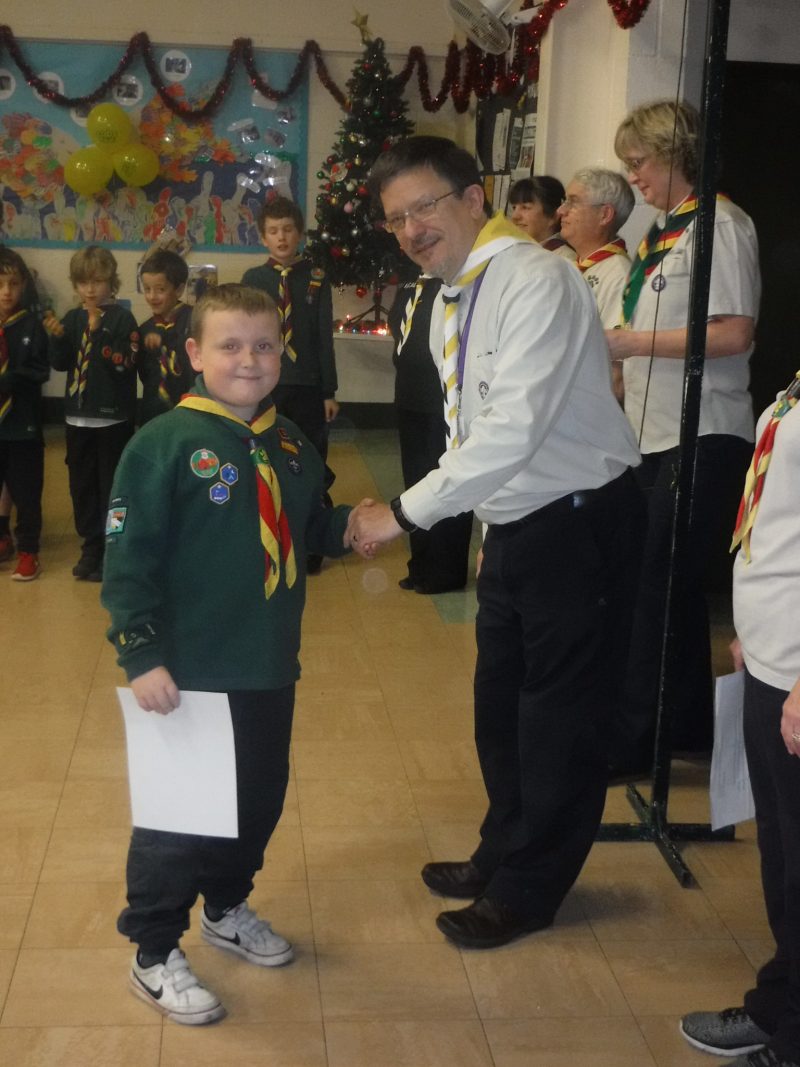 On Friday 16th we meet at our HQ for a sleepover and then with our banner that we made in Cubs over the last few weeks we marched up to the church then climbed the 15stairs to the gallery which overlooks the church then at 19;16 we renewed our promise with our Dist5rict Commissioner, after our promise which we did live on our Groups Facebook page, we marched back to our HQ for our sleepover. 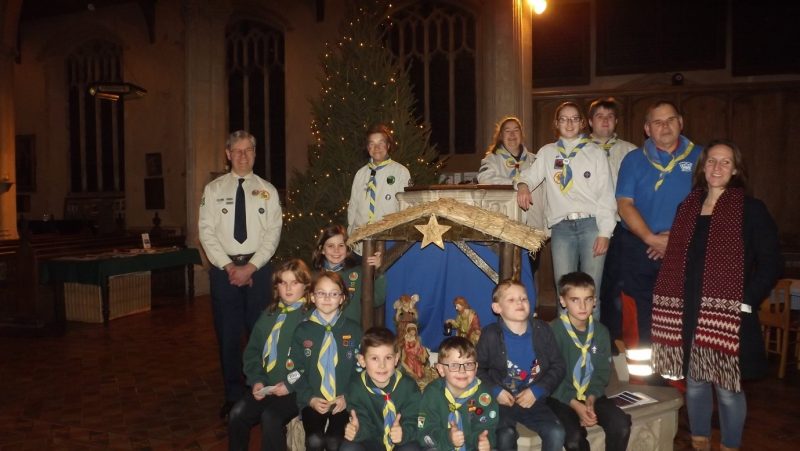 A foggy Friday evening set the scene for 2nd Marham (RAF) Scout Group to host the South West Norfolk District Cubs 100 Promise Party. Despite the conditions 70 of the Districts Cubs were able to make it along with their leaders and join together just inside the main gate at RAF Marham with the stunning back drop of the Tornado GR44 gate guard and station Christmas tree.

SW Norfolk Assistant District Commissioner (Cubs) Carolyn Cooper led the Cubs in the promise at 1916 (timed with military precision!) and boy did they give it some gusto! Carolyn then had the pleasure of investing 5 new Cubs into their respective packs both at Thetford and Marham.

SW Norfolk’s Acting District Commissioner Mike Preston then thanked the Cubs, leaders and families that had come along to take part in this party on this once in a lifetime occasion.

It was then the turn of Station Commander RAF Marham, Group Captain Richard Davies to say a few words. A huge thanks was given to all at 2nd Marham (RAF) for the work that has gone in to organising this event, not just for the Marham Scout Group but for the whole District. Group Captain Davies then went onto say that he felt privileged to be a part of the event, as not only did it mark the occasion of the Cubs 100, but also marked the final event in Marham’s centenary year of celebrations. The Cubs were told by the Station Commander that they may not realise it yet, but they had just become part of the stations history and in years to come they will be able to tell their children and grandchildren where they took their promise to mark the 100th Anniversary of the Cub Scouts.

The parade then moved back to the Sandringham Centre at RAF Marham to continue with the celebrations, be entertained by Pippa’s Mad Hatters, and dance the night away with CJDJ’s Disco from Marham.

Carolyn then had the pleasure of presenting 3 of 2nd Marham’s Cubs with their Chief Scout Silver Awards for gaining all of their challenge badges. Well done Jamie Sharples, Jacob Thompson and Noah Clarke – a huge achievement.

A great time was had by all and special thanks goes out to Cub Scout Leader Michael Brown for organising the event, supported throughout the day by Group Scout Leader Owen Clarke, Assistant Cub Scout Leader Katie Leonard, Scout Leader Nathan Evans and Occasional Helper Erin Clarke. Without all of these people, and everyone else that came along to help, the event would not have taken place.

Thanks also to all of the District Members that came along and helped us by bringing their Young People to the event. A great time was had by all. Here is to the next 100 Years.” 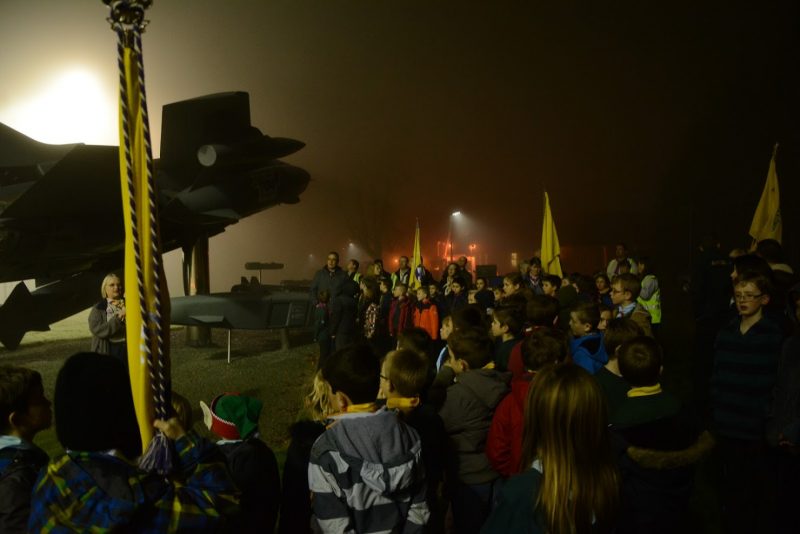 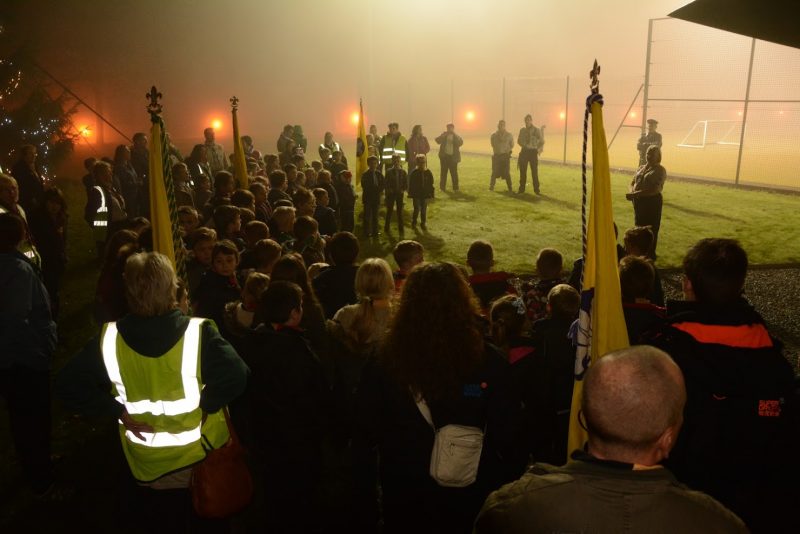 35 Cubs from 1st Harling, south West Norfolk celebrated with a sleepover at Eaton Vale Scout and Guide Activity Centre in Norwich. After remaking their promise at exactly 7.16pm. The Cubs sang happy birthday and had a fun filled night of games and a disco with a finishing with a fantastic firework display and hot chocolate before heading off to bed. As usual the cubs were up very early the next day which they spent code braking, creating Christmas crafts and scouring the grounds for treasure before sitting down to a delicious Christmas lunch and a movie. A great way to start the next 100 years of Cub scouting. 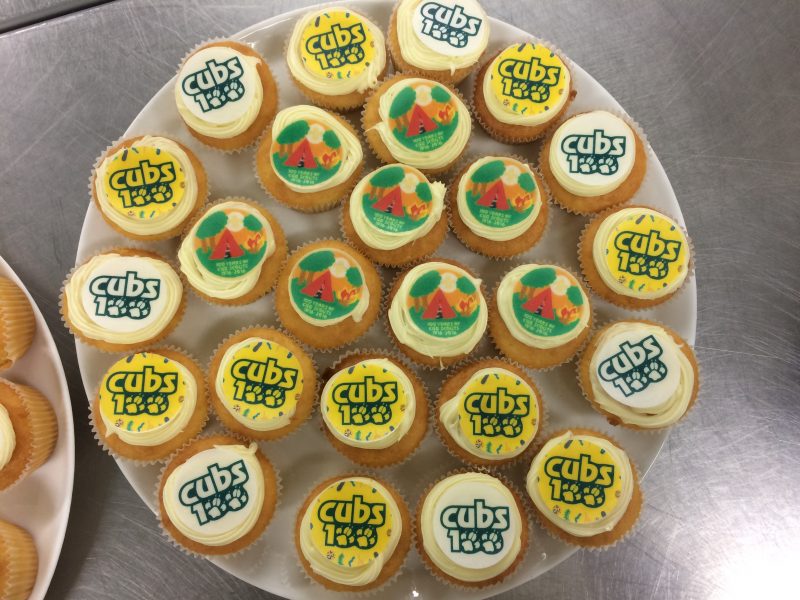 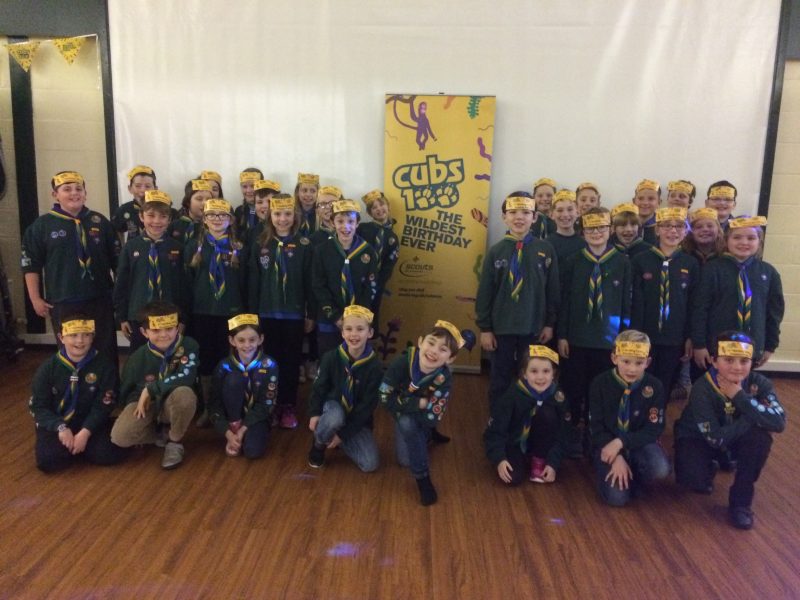 Around 30 Norfolk Cubs are preparing for the curtain to go up on a historic piece of Scouting history.

The young people, who are members of the 17th Norwich Scouts, will be joining in with a national initiative to re-take their promise and mark 100 years of the Cub movement.

And the ceremony will happen at 7.16pm on Friday December 16 on the balcony of Norwich Theatre Royal, exactly 100 years since the time the Cub Scouts were first officially registered.

Diane Newson, a leader with the 17th Norwich Scouts, said: “We wanted to find somewhere a bit different to do it. A large number of our Beavers, Cubs and Scouts are coming along to see this year’s pantomime and we thought, why not do it at the Theatre Royal?”

So the young people will take centre-stage for the historic ceremony before enjoying the pantomime Jack and the Beanstalk, which features a star cast headed by Wayne Sleep.

John Bultitude, of Norwich Theatre Royal, said: “We were delighted to support this historic moment in the history of the Cubs and Scouts movement. To have it mixed in with a visit to that other great British tradition of pantomime was too good an opportunity to turn down.” 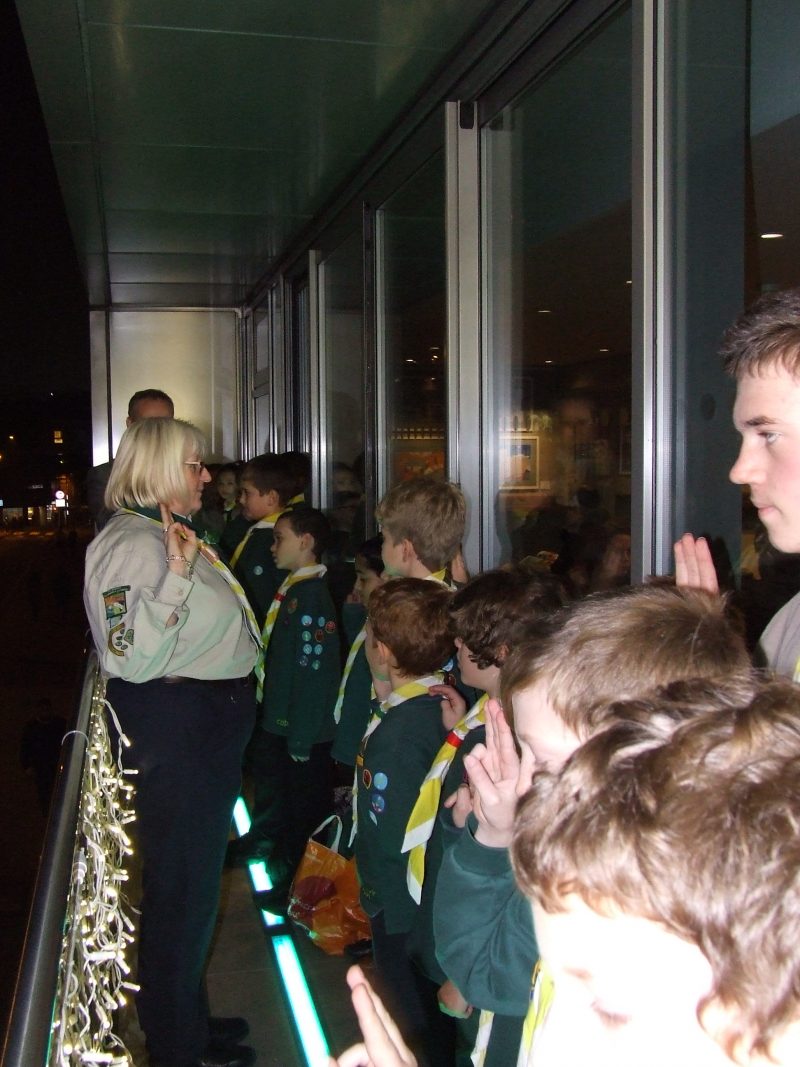 There were 14 cub packs, with over 170 cubs renewing their promise at Snetterton Circuit.

Over 350 people, including families and VIPs attended the promise renewal. Cubs then got to go onto the race track with their leaders and walked a route just over a mile long.

Once they returned, they were rewarded with medals, food and hot drinks, where an impressive firework display then took place.

Steve Martin, who, led by Beryl Watts helped to organise the event said the whole thing “had gone wonderfully. Everything went really, really well. It was a typical Scout event but it was all possible thanks to the skills of the leadership team.”

He also expressed gratitude to Snetterton Circuit for allowing them to attend and said they had been incredibly supportive. They were particularly delighted to hear that Jamie Hopper, the circuit manager that helped to make the evening possible was a Cub Scout himself 38 years ago.

Ellis, a Cub in Old Buckenham said she “loved the fireworks. It was cold but fun…and on the walk it was really dark so we told lots of scary stories.”

Haile who is a Cub in Attleborough thought the evening was, “really fun! I especially enjoyed the food!”.

Martin Durrant is a Cub Leader and summed the evening up as “a brilliant event”. 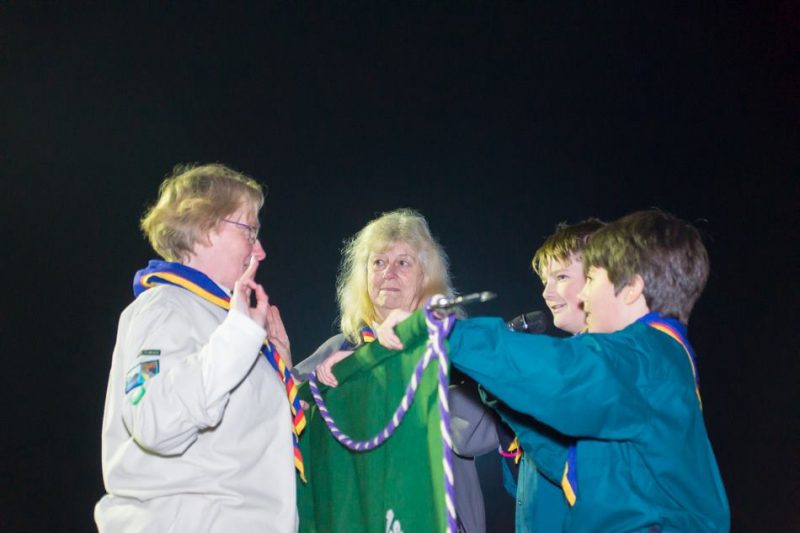 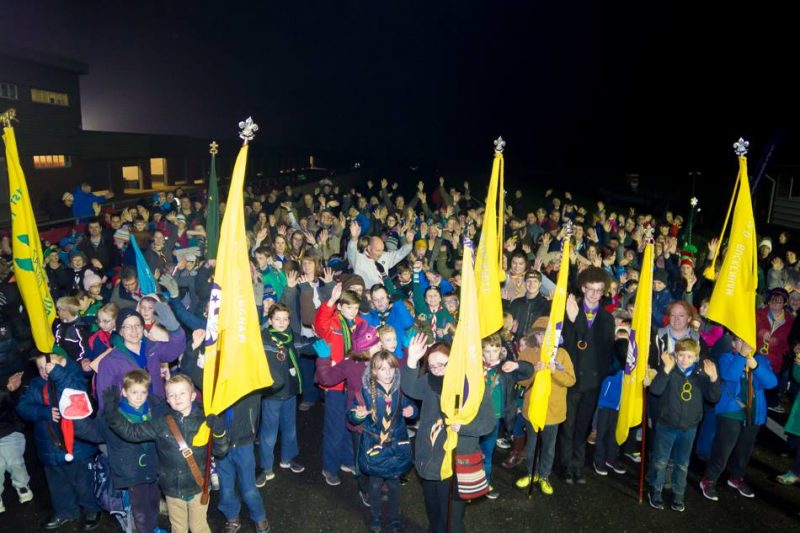 The CUB100 Timeline can be found by following this link