Hello, I am Beka Millard, Assistant County Commissioner (International), also known as the ACC(I). I wanted to give you a quick update about our World Scout Jamboree contingent.

The Information Evenings for applicants and their parents/carers were held on 25 September at 2nd Dereham and on 26 September at Eaton Vale Activity Centre. We had 61 young people attend these evenings, which we feel provided a useful insight as to what the young people can expect going forward in the process. At these evenings we were also able to announce the fee for the 24th World Scout Jamboree, being £3,495. Both of the Norfolk Contingent Leaders attended the evenings and Penny Harris is already raising funds for the Contingent holding a raffle at each of the evenings, raising £90.

Penny and Michael will be attending the first Unit Leader Conference on the weekend of 4 November, where they will hopefully gain valuable insight into the year to come.

We were also able to announce details of the Selection Weekend for the young people, which will be on 18 and 19 November at Saxlingham Nethergate Scout HQ. Full details as well as a pack with information on the Jamboree will be sent to the young people shortly.

As part of this, a meeting with the Contingent Leaders for the Suffolk part of the Contingent was arranged for 3 October, in order to start the conversation, get the two halves of the group working together and allocate the various Unit Leader roles. A date has also been set for when the two halves of the Unit will first meet, on 2 December at Two Mile Bottom. Full details will be sent out in due course. 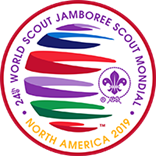