Last weekend (25/26 April) should have seen a host of St George’s Day parades and fun days across Norfolk held by the roughly 9,000 strong local Scouting organisation.

On the Sunday nearest to St George’s day the Scouts traditionally come together to renew their very special promise but like all groups that is impossible at the moment.

Faced with the challenge of not being able to be together the Scouts came up with other ways to be as one.

“It was amazing and rather moving” said Matthew, Our County Commissioner “at quarter to eight our special TV show premiered on YouTube which guided our young people through the process of remaking their promise at home at one point 700 people were streaming it”

The TV show featured young people and adult volunteers from all over Norfolk who have achieved the Queen’s Scout Award, the highest award a young person can achieve in Scouting or who had been recognised by the Chief Scout for outstanding service.

You can watch the TV Show here.

The TV show features many volunteers who had been invited to parade at Windsor Castle this year but had their special day cancelled due to lockdown.

Many of the movement’s Groups had organised virtual meetings using apps like Zoom to watch the TV show together.

“We’ll never know exactly how many joined in, but we’re talking in the thousands. We’re so grateful for all the adult volunteers who helped pull this off” finished Matthew,

Not all the people were remaking their promise, some like Kate Lawton of the 1st Smiles Scout Group made it for the first time as the Group’s new leader of the Beaver Scout section, for young people aged 6-8 years old.

1st Smiles is Norfolk’s newest Scout Group being launched last year with the support of charity Nelson’s Journey to provide access to scouting for young people who are working their way through bereavement. 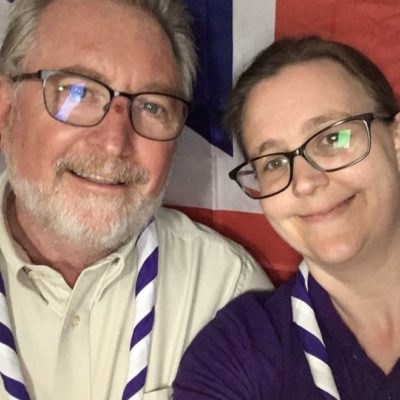 Kate said “I’ve been with 1st Smiles since the launch just under a year ago but St George’s Day felt like the right time to make my Promise. I’m using the “lockdown” to work on my training modules as I think our group may be sadly needed more than ever once this is all over.